In the last two blog posts (Doing Business in Wonderland: The Shifting Sands of Competitive Advantage and Corporate Strategies for Growth in Dynamic Marketplaces), I’ve talked about business environments characterized by VUCA (volatility, uncertainty, complexity, and ambiguity), which make flexibility a necessity. In this post, I want to focus on an important but often-overlooked cause of some of that complexity: the growing expectation that corporations will behave like responsible members of a community, rather than like profit-seeking missiles that in their quest for short-term gains ignore all else.

What got me thinking about this topic was an article published last month in the MIT Sloan Management Review called “The essence of strategy is now how to change,” by B. Tom Hunsaker and Jonathan Knowles. In discussing some factors that have created the need for innovative strategies, the authors wrote:

“The current emphasis on corporate purpose and environmental, social, and corporate governance are manifestations of the intense pressure companies are under to demonstrate their social legitimacy. As a result, business leaders need to…broaden the number of stakeholders whose needs and potential contributions are evaluated during the strategic planning, review, and refinement process.”

Though discussions of VUCA usually neglect this pressure in favor of other factors (like technological developments and globalization), I think executives ignore these societal obligations at all of our peril.

Perhaps the highest-profile response to this pressure from the business community has been the Business Roundtable’s “Statement on the purpose of a corporation.” The Business Roundtable is a nonprofit with a decidedly for-profit membership: CEOs of large American corporations. But in 2019, they issued a statement against the profit-seeking-missile style of business and in favor of a “fundamental commitment to all our stakeholders” (emphasis mine).i Stakeholders include customers, workers, suppliers, members of the community, the environment—and, lest we forget, shareholders.

For decades, of course, it was shareholders and shareholders alone whom corporate leadership was said to be responsible to. The best-known proponent of this view was the Nobel-winning economist Milton Friedman, who in 1970 published the straightforwardly titled essay “The social responsibility of business is to increase its profits.” He thought corporations pursuing other goals were being unfair to the investors whose money was at stake. Instead, he said, the ethical concerns of the larger society should impinge on the company from the outside—through government regulation. And for a long time, it was Friedman’s perspective that dominated.

Increasingly, however, corporate leaders are talking about other concerned stakeholders—the communities in which companies are based, the hourly employees, the people who breathe the air and drink the water affected by companies’ manufacturing, and so on. Such concerns seem even more pressing in a pandemic that has pointed up inequalities between workers with low-paying but essential jobs and professionals who stay safe in their home offices. Last summer also highlighted longstanding racial injustices, which manifest themselves not only in policing but in the greater environmental impacts experienced by some communities.

Of course, not everyone agrees that “stakeholder capitalism” should be a thing. Some say it’s too vague, that there’s no clear way to balance so many competing interests. Others say it is a PR stunt, not a genuinely new direction. Still others think Friedman was right when he suggested it wouldn’t accomplish good so much as provide a smokescreen for rogue executives to do whatever they want. Even among those who believe corporations do owe something to society at large, there is still plenty of debate about what those responsibilities are and how they should be discharged. In the rest of this post, I’ll sketch out a few different approaches to the issue.

One way to decrease vagueness and increase accountability is to clearly and publicly report a company’s goals regarding its stakeholders as well as its progress toward those goals. This is the method used by Target Corporation in its 2020 Corporate Responsibility Report, which lays out detailed plans like this: “By 2022, 100% of Target’s Archer Farms and Good & Gather coffee…will be certified sustainable according to the Fair Trade USA standard,” as well as its progress so far (28.6% of units are so certified already).ii Other goals include installing solar arrays on 500 Target stores, eliminating underage labor in its supply chain, and promoting diverse employees to management positions.

More and more companies are seeking to become “B Corporations,” which is not a legal designation but rather indicates a commitment to stakeholders beyond the shareholders. The nonprofit B Lab certifies the companies if they score well enough on several metrics having to do with society and the environment, thereby introducing third party accountability. According to the analysis “Why Companies are Becoming B Corporations,”iii the move may be motivated both by a sincere wish to give back to society as well as the desire to distinguish oneself from competitors who are all “talking the talk,” now that corporate responsibility is trendy.

While B-Corporation status is based on satisfaction of a variety of performance metrics, the impact-weighted accounts initiative (IWAI) takes another approach to measuring a company’s role in the community. Specifically, the IWAI attempts to put a monetary figure on the impacts of a corporation’s products on society and environment—to actually quantify both the positive and negative effects and thus allow comparisons of different companies within an industry.iv

The researchers do this through complicated calculations based on publicly available data. For instance, to compare companies selling packaged food to consumers, the researchers accounted for dimensions including the health impacts of the food; whether it was reaching underserved consumers (measured by use of food stamps to buy the food); its affordability; emissions resulting from the product; and its recyclability. Though this and other efforts to quantify so many different factors are still relatively new, it will be interesting to watch, given its rigor.

Those worried by the current state of the corporation sometimes particularly lament the pursuit of short-term profits to please speculative shareholders, resulting in strategies harmful to employees as well as the long-term health of the company. In a January 2021 piece from the Harvard Business Review entitled “It’s Time to Replace the Public Corporation,”v Roger L. Martin sees this problem as inherent to the publicly traded company and goes on to advocate instead for “long-term enterprises.” These would be private companies owned jointly by employees of the firm itself along with investor partners such as pension funds. Such owners would, presumably, share interests in the company’s resilience and steady growth. This structure might sound a little pie-in-the-sky, but Martin points to highly successful employee-owned companies like Publix Super Markets and Graybar Electric to show how competitive this model could be. This approach goes beyond stakeholder value and begins to question the very essence of the corporation as we enter the 21st century.

Another framework for thinking about how organizations contribute to the wider society is actually one borrowed from political science: the creation of public value. Public Value theory posits that organizations create both valued and disvalued effects on society that can be recognized and accounted for in a way similar to a profit & loss statement. The multiple dimensions of value include client satisfaction, individual or societal welfare, and individual or societal justice. This framework goes beyond typical environmental, social, and governance factors to describe and account for how organizations contribute to the current day systems of welfare and justice.

What lens do you use to think about the value your business brings to society?

The management of Public Value suggests that corporations “earn a right to continue operations in the social and political world as well as the economic world” and that corporations “work to produce legitimacy and support from government, local communities, and the general public as well as from investors, customers, and employees.” Much of this work is already underway by corporations, so a proactive stance might be more “rational and understandable” than one might think.vi

The last approach to corporate decision-making I want to mention takes a very different perspective. While the other methods or models mostly start from outside the organization (by inviting external stakeholders to be heard, measuring the company’s impacts on society or the environment, and so on), the recent journal article “Humanizing strategy” suggests an “inside-out” approach to corporate governance.vii

Specifically, authors Ikujiro Nonaka and Hirotaka Takeuchi say companies will thrive if they draw inspiration from the long-range vision of a founder (or her successors). This vision, they say, must include a desire “to make the future world a better place in which to live,” but its power doesn’t lie in performance metrics or quantification of impacts. Rather, a true “future-making” vision infuses an animating force through an organization—it keeps the company moving forward in a balanced, organic way. If strategy starts from the company’s human core, the authors claim, it will benefit society in a way that mere pursuit of profit would not allow.

A Choice of Frameworks

From an “impact-weighted accounts initiative” to the beating heart of a “humanized strategy,” a lot of ink has been spilled over how corporations should reckon with their societal obligations. I find some of the concepts listed above more compelling than others, and of course they differ not only in their methodologies but in their proximate goals (to allow quantified comparisons across companies, to avoid short-term profit-seeking, to offer transparency to the public, to help companies thrive by making a different future, etc.). Nonetheless, I wanted to juxtapose a few different ways of thinking about this increasingly important issue. Consumers, employees, and society at large expect more from corporations today, so what lens do you use to think about the value your business brings to society?

[i] “Business Roundtable redefines the purpose of a corporation to promote ‘an economy that serves all Americans’” from Business Roundtable
[ii] “2020 Target corporate responsibility report” from Target Corporation
[iii] “Why companies are becoming B Corporations” by Suntae Kim, Matthew J. Karlesky, Christopher G. Myers, and Todd Schifeling
[iv] “Accounting for product impact in the consumer-packaged foods industry” by Amanda Rischbieth, George Serafeim, and Katie Trinh
[v] “It’s time to replace the public corporation” by Roger L. Martin
[vi] “On Creating Public Value: What Business Might Learn from Government about Strategic Management” by Mark Moore and Sanjeev Khagram
[vii] “Humanizing strategy” by Ikujiro Nonaka and Hirotaka Takeuchi

George Veth is a consultant in the areas of strategy execution and initiative management. Most recently, he has been leading a cross-boundary collaboration program with teams from cities across North America and Europe. He lives in Cambridge, MA, and runs a nonprofit SME Impact Fund in East Africa. His subject matter interests are organizational culture, management [system] innovation, and public value management.

View all posts by George Veth → 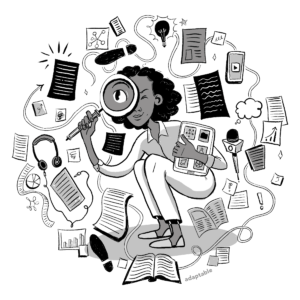 Have you read something on Strategy Execution or Management Innovation that has intrigued you and that you believe should be included here?

Please tell us about it!

Updates in your Email

Adaptable offers a monthly newsletter and weekly favorites via email to subscribers.  It is free for now. Enjoy!